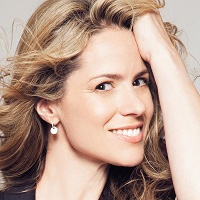 Farah was born an entrepreneur. She started her first business when she was nine (performing at birthday parties and being paid with cake), her second big entrepreneurial success happening when she was 16, then a flop in her early twenties, then her best idea yet.

After graduating from the University of Western Ontario and completing a marketing program in Toronto, Farah, CEO & CO-FOUNDER of Speakers’ Spotlight started her career in the advertising industry. In 1995, she took a deep breath and a major plunge into the biggest risk of her life. Yes, she married Martin Perelmuter (but was pretty sure that would work out), and together, they quit their jobs and started their own business, Speakers’ Spotlight. The adventure began.

Since starting the business in a little room in their apartment, Speakers’ Spotlight has grown beyond Farah’s wildest dreams. Today, they have offices in Toronto, Vancouver and Calgary and the best staff in the industry. The agency was selected by Profit Magazine as one of the 100 fastest growing companies in Canada and twice the couple has been named finalists for the Ernst & Young ‘Entrepreneur of The Year Award’. Farah has been recognized in the industry numerous times, for instance; Profit Magazine has ranked Farah as one of Canada’s Top 100 Women Entrepreneurs for seven consecutive years, in 2008,

Farah has been featured numerous times in media and has twice been featured on the covers of national magazines. Her opinions have been quoted in various business books including in the first Canadian edition of Contemporary Business Communication, a college and university textbook published by Houghton Mifflin Company. Farah is a sought-after mentor by many ‘start-ups’ and other executives and entrepreneurs through various organizations. She believes in giving back, inspiring, and learning from, others in business. But for this entrepreneur, her most important job is being Mom to Jade and Cole (oh, and wife to Martin, too).